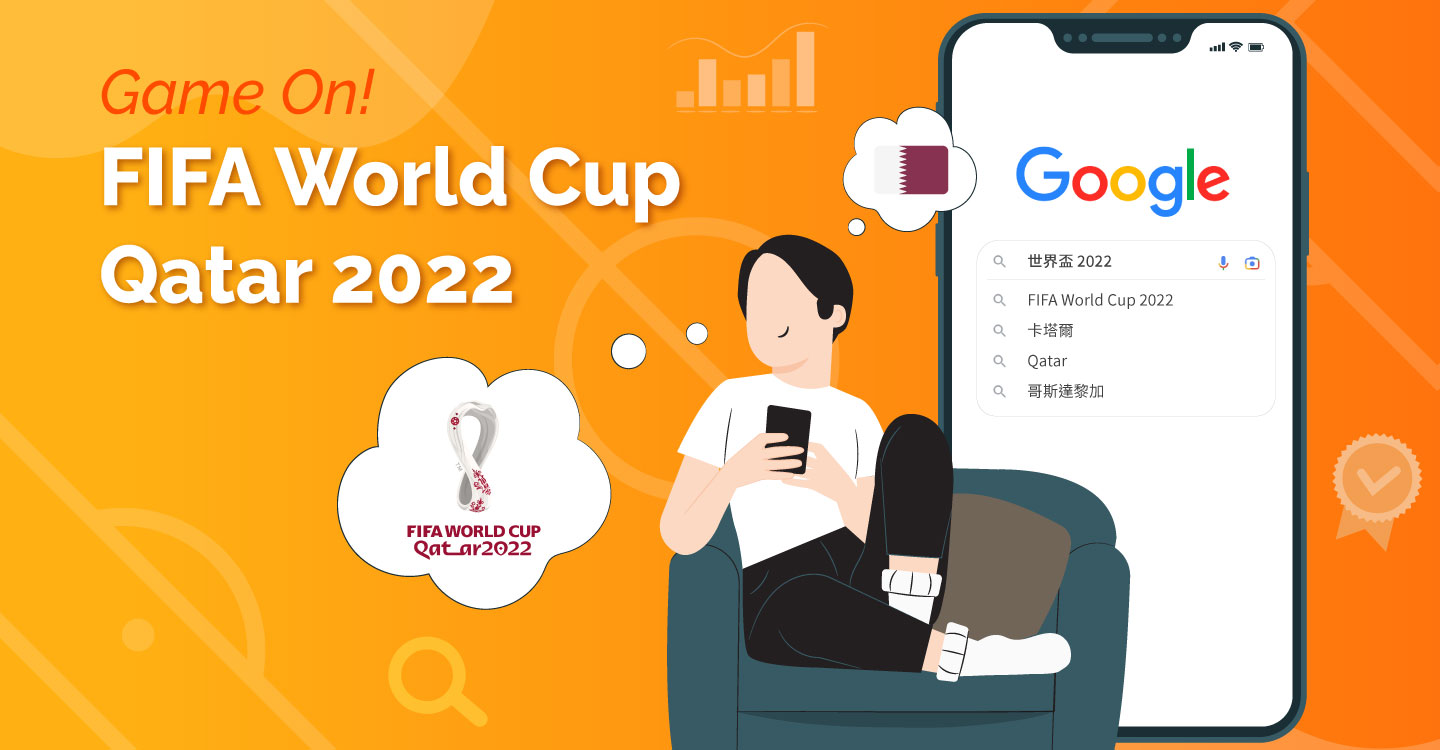 What’s Hot, What’s Not? Capitalizing on the Captive Audience

Football and sports fanatics, the stage is set! As the world keeps an eagle eye on the FIFA World Cup Qatar 2022 and prior to the kickoff on 20 November 2022, a surge of web browsing gradually flooded in since early October. This prompts a high volume of online search for keywords like “FIFA”, “World Cup Final”, “Qatar”, “Live streaming”, “Tournament”, “Schedule” and so on.

Prior to the opening of the event, Hotmob Datahub took the chance to study the search behaviour of web audiences related to World Cup contents and consolidated a list of findings. Let’s explore for more insights.

We have started monitoring online search volume of “World Cup” related articles within Hong Kong since September and until mid November 2022. It was found that there were two noticeable spikes between 27 October and 5 November in comparison to other times with less amount of browsing activities.

In contrast to the first spike in mid-Oct, there was a double increment in search volume of articles related to the “World Cup” in late October. Following in a logical sense, that increase could be contributed by a number of publishers posting promotions associated with the “World Cup”.

Moreover, after the Hong Kong government made an announcement in late October regarding further easing of Covid-19 social distancing measures on beaches, bars and restaurants, it has attracted more online search for “World Cup”. For instance, the live screaming locations of the World Cup and beers.

These data indicate that the web audience has already been browsing actively as early as two months before the official World Cup started. Retailers and merchants should take the chance to build up World Cup related content via blogs and social media in order to grab business opportunities. 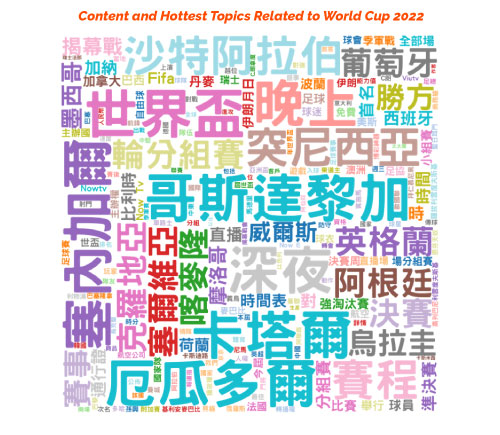 From our word cloud analysis, the most searched topics by web audience are the countries participating in the World Cup tournament and this year’s World Cup host nation. For instance:

Despite a number of controversies prior to the launch of the World Cup, it is concluded that this event is still being considered as one of the hottest major sporting events ever in the world. 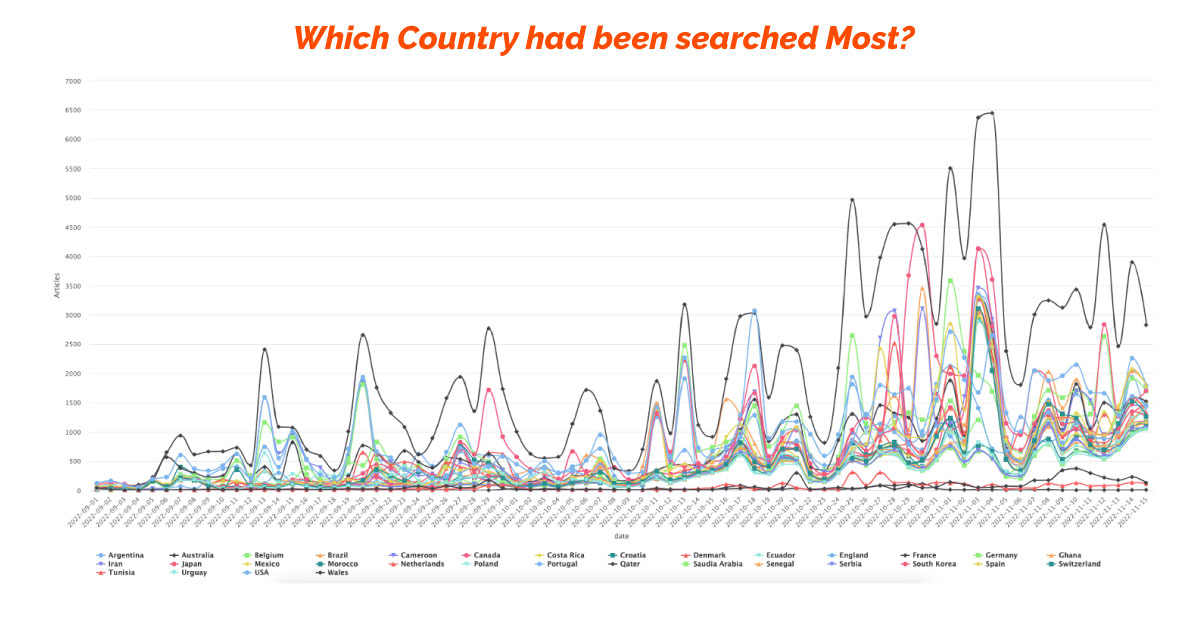 Through Hotmob’s hot keyword search analysis, it was identified that the following top 10 countries were being searched most prior to the launch of the event. 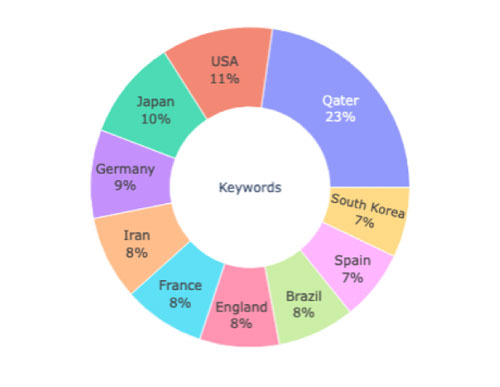 Among the list of participating countries, Qatar accumulated the highest volume of search. While the U.S.A. comes second as it was one of the teams to compete in Group B on the second day of World Cup (21 Nov). Interestingly enough, web audiences were also interested in monitoring the U.S. stock market during World Cup 2022, thus the keyword search rate increased substantially prior to the match kickoff.

On the other hand, most Hong Kong web audiences were following Japan news closely prior to World Cup launch, as Japan got into the “Group of Death” (Group D) in the tournament which ran riot over Spain and Germany. 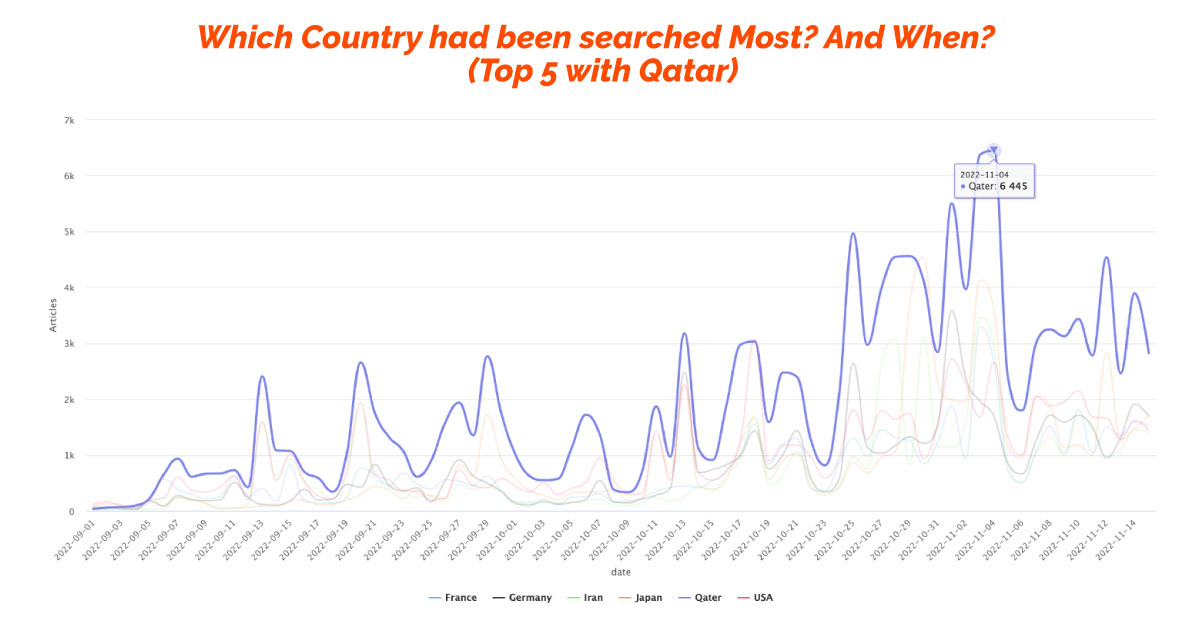 On top of that, there was a rise in search volume related to the top 5 countries playing against Qatar towards the end of October and early November. This also indicates that the web audiences had been searching for restaurants that offer live streaming of the World Cup matches.

At the same time, we spotted there was a siginifcant increase in search for the “World Cup'' on 28 October as most web audiences were searching for the details of the tournament as follow:

What’s in it for you?

High Search Volume Articles or Content and Hot Keyword Search are only a few examples of Hotmob’s web audience analysis. Hotmob Datahub is a one of a kind one-stop data solution that marketers and businesses can take advantage of, supporting with key data and valuable insights, closing customer gaps and blind spots while creating new business opportunities.

From now on, marketers and businesses can:

Follow us on Facebook and Linkedin and keep an eye on our latest posts for more updates!